[Trailer Update] The Legend Of Zelda For Wii U Wows E3 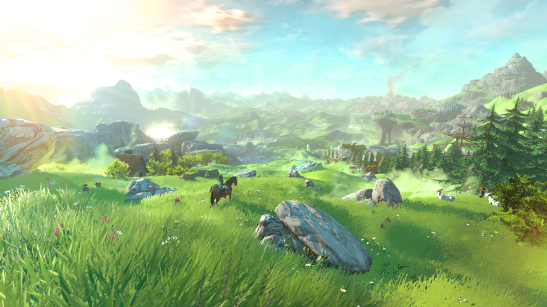 Today at the Nintendo Digital Event, the long awaited next iteration in the Legend of Zelda series was officially revealed.

While no title was given, we were shown a large open land scape done in a lush oil painting art style. Not disimilar to Skyward sword. Link on his trusty horse Epona stands tall in the distance.

The trailer ends with the duo being attacked by a monster that could only be described as a seriously supped up Octorock. Link also has a somewhat feminine look leading many to believe we may see the first female iteration of link in this game.

Producer Eiji Aounuma said that his development team is a “rethinking the conventions of Zelda.” He later expanded by talking about achieving a vastness to his game world that they had only dreamed of achieving on earlier hardware.

This entry was posted on 06/10/2014 by Thomas Carhuff in Nintendo and tagged Eiji Aounuma, Nintendo, The Legend of Zelda, Wii U, Zelda.