Are you looking for an amazing “Super Mario Maker” course? Editor Byungsuk Kim has you covered.

Hello everyone. I’m Byungsuk Kim and I designed “Mountain Top Valley (Ground)!” From the beginning, my goal was to build a very elaborate, well designed Mario course that was rewarding, partly challenging, and but more importantly, to give the player a chance to explore. I will be talking about the thought process the courses I’ve designed and the challenges I face.

The empty Buzzy Shell would stop the player from immediately moving right. Most of the time, they’d die at first.

One of the challenges when building Mountain Top Valley was trying to figure out how to give players a sense of wonderment and a reason to want to explore. I didn’t want the player just simple move to the right like in most Mario course. I felt that it was important to try to get the them stop and examine their options at the beginning of the course. So in order get them from doing that, I placed an empty Buzzy Shell near the player’s feet. This resulted in many first time deaths. The Buzzy Shell also served as a way to indirectly teach them to learn that they could use the empty shell as a helmet or either attack the Red Koopa and discover an alternative route to explore. Since they couldn’t do wall-jumps holding the Buzzy Shell and if they noticed to Question Mark Block and decided to butt stomp it while holding the empty shell, they’d be rewarded for their patience (sorry I won’t spoil what happens). I felt it was a good way get anyone who played the course a reason to stop and think of what to do next.

Coin placement also played several important role since it was a nice visual way to indirectly communicate with the player that there’s a secret to find if you do this or that. It not only rewarded players with extra lives, it also showed them different ways to proceed with many of the obstacles they’d have to face but also illustrate which directions they could chose if something was too hard.

The marching Green Turtles at the beginning of the course don’t really serve anything noteworthy other than to draw attention to the Note Blocks and Jumping Spring. It was important to illustrate the physics during the early planning stages of the course as I wanted to some unpredictability. It was far more complicated during the early planning stages and resulted in the course never working consistent enough to justify it existence regardless of how much tweaked it. Adding new parts throughout the course affected the physics for some odd reason. In the end, it become more of nuisance and didn’t add anything to the overall enjoyment of the course, so I quickly abandoned it. What remains with the experiment is the mushroom and the 1-UP returning to the patient player. 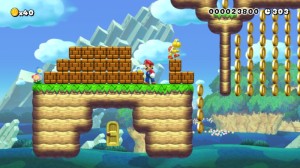 There are two boss battles in Mountain Top Valley. One has you facing the magic wielding MagiKoopa and the Fire Piranha Plant. I felt that it be fun to include him since he’s able to give chase. If you’re good, you might be able to get the 1-UP stuck in the right hand wall but you’ll probably won’t be able to get it.

As I added more and more to Mountain Top Valley, I wanted to give the player some kind of visual reward that was instantly recognizable, the Mario Monument was a no brainer. If you look really hard, you be able to find a secret.

Stay tuned for more in depth information about Mountain Top Valley (Ground) in our next entry. For those who are wanting try the Gaming After Hours course can do so. We’d love to hear from you. If you have questions for Byungsuk Kim. You may contact him through his twitter account @Byungsuk_Kim.