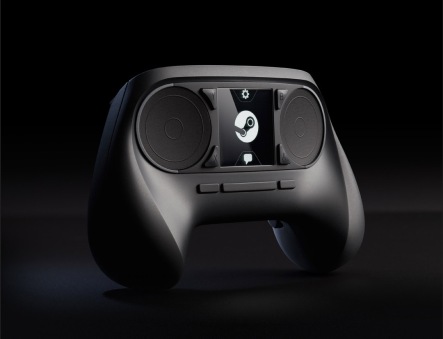 The company, Valve hopes that their new controller will  bridge the gap between mouse and console control. Like many controllers that hit the market, there’s always a concern about comfort and buttons.  If you were worried whether Steam’s new controller would be lacking in the button department can rest assured, as the controller will feature 16 buttons and it’s also been crafted in such a way that when held, to be comfortable regardless of whether you are right-handed or left-hand.

Valve explained that the new Steam Controller features two circular trackpads which is, “driven by the player’s thumbs, each one has a high-resolution trackpad as its base. It is also clickable, allowing the entire surface to act as a button. The trackpads allow far higher fidelity input than has previously been possible with traditional handheld controllers. Steam gamers, who are used to the input associated with PCs, will appreciate that the Steam Controller’s resolution approaches that of a desktop mouse.”

Valve believes that the Steam Controller, with assistance of next-generation haptic feedback will provide players to precisely control the frequency, amplitude, and total direction of movement. This allows for full delivery of a wide range of force and vibration and should “allow developers to easily convey information about speed, boundaries, thresholds, textures, and action confirmations, among other things. The company hopes that this will allow a “whole genres of games that were previously only playable with a keyboard and mouse” easier to play on a TV. “In addition, games like first-person shooters that are designed around precise aiming within a large visual field now benefit from the trackpads high resolution and absolute position control.”

This includes, “three shoulder buttons on each side, four face buttons, the three clickable touch surfaces, and three other menu-like buttons in the vein of Start, Select, and Home” and in addition, a touch screen that can also be used as a button and allow players to draw on the screen to function as an input their choice of action then confirming it with a simple press.

Valve explained that the buttons on the controller have “been placed based on frequency of use, precision required and ergonomic comfort. There are a total of sixteen buttons on the Steam Controller. Half of them are accessible to the player without requiring thumbs to be lifted from the trackpads, including two on the back. All controls and buttons have been placed symmetrically, making left or right handedness switchable via a software config checkbox.”

Here’s an example of a possible configuration of Portal 2.

Valve continued to explain that, “the Steam Controller was designed from the ground up to be hackable, just as the Steam Community and Workshop contributors currently deliver tremendous value via additions to software products on Steam,” Valve explained, “we believe that they will meaningfully contribute to the design of the Steam Controller. We plan to make tools available that will enable users to participate in all aspects of the experience, from industrial design to electrical engineering.”

This entry was posted on 10/03/2013 by Byungsuk Kim in Computer and tagged Haptic Technology, Steam, Steam Controller, Touch Screen, Valve.