The world of Mario Kart has always been full of fun antics with red shell victories. Mario Kart 8 for Wii U has a darker side when taken in slow motion. A feature that is new to the Mario Kart franchise. When it comes to its inventive courses and its colorful cast kart racers, Luigi is one character that, for better or worse, will take his victories by force — depending on the player — while stare you down once he finishes you off. The first thoughts many may think of when it comes to the secondary Mario brother is his timid demeanor and unwillingness to take what he believes is his. But what if it’s all a facade for his Mushroom compatriots? Perhaps his true side brings out his demonic side once he gets behind a the wheel. 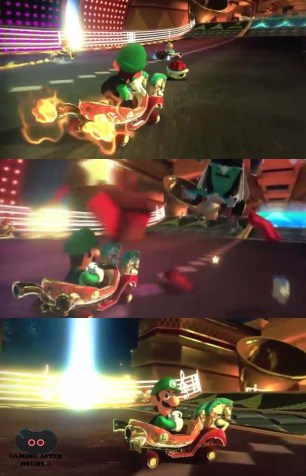 The “Year of Luigi” didn’t work out so he’s coming back for vengeance!

Of course there have been many iterations of the beloved kart racing franchise but it wasn’t until now that we’ve never been able to get this close the kart racing action thanks to it’s slow motion feature. Slowing it down will show many characters hidden characteristics were once hidden and we can finally see what really happens behind the kart wheel.

One might think that such thoughts of Luigi may be up to interpretation and Nintendo would never show their characters in such light. At least not on purpose. You may be hard pressed to of Luigi in any other way and that’s fine. But for others, this is a sign that this plumber means business.

The “Year of Luigi” didn’t work out so he’s out for revenge. For more Mario Kart slow and fast action
Keep it here!