A Super Smash Bros for 3DS packaging has been revealed by both NeoGaf community and another image translated into English that GoNintendo shared. Some of the information shared is already known within the gaming community but having further confirmation is always welcomed.

According to the post, the promotional packaging makes mention of a few interesting things. There is no mention of Konami, so that removes any possible chance of there being any Konami playable characters. There’s also mention of some Street Pass functionality and the ability to customize your characters to the Wii U version

The packaging shows that each Nintendo 3DS user will require your own copy of the game in order to play local (3DS to 3DS) play. So anyone who was hoping to download the game for a quick battle via Download Play will be out of luck. The game file size is a beefy 2.1 GB (17,300 Blocks).

It also shows the list of company’s involved and their respected characters: 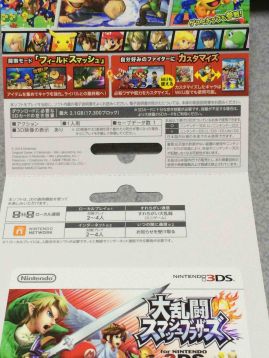 For even more Smash Bros. tidbits, follow Gaming After Hours