Video game Destiny has officially done the Ice Bucket Challenge by sending an ice filled bucket from the moon.

Developer Bungie has created an Ice Bucket Challenge video on their YouTube channel using current assets from the upcoming title, Destiny. The ALS Ice Bucket Challenge has been spreading around the internet, reaching celebrities, fictitious characters and everyone else in-between.

The Wizard from Destiny has challenged Jonathan Iron of Call of Duty: Advanced Warfare (voiced by Kevin Spacey), Joel from The Last of Us (voiced by Troy Baker), and Star Wars creator, George Lucas. Until September 9th Bungie, will be donating 20% of all proceeds from the Bungie Store (www.bungiestore.com) to the ALS Association. 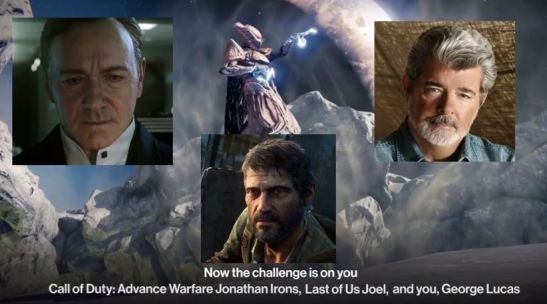 Please donate to the cause, its your Destiny

This entry was posted on 08/23/2014 by Byungsuk Kim in Gaming After Hours, Microsoft, Nintendo, Sony and tagged ALS, Bungie, Destiny, George Lucas, Ice Bucket Challenge, Jonathan Irons, Playstation 4, PS4, The Last of Us, Xbox One.