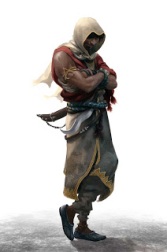 Assassin’s Creed: Brahman is set in the 19th century India where our new assassin named Arbaaz Mir fights for his homeland from British oppression. The project is being written by Brendan Fletcher and art is created by two artists, Cameron Stewart and Karl Kerschl, who were responsible of the previous Assassin’s Creed comics.