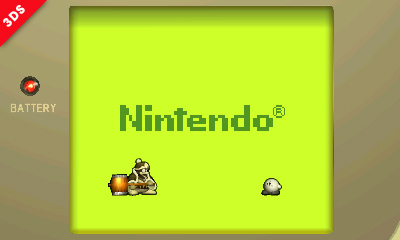 No surprise here, with the Super Smash Bros 3DS version focusing on content that relates to handhelds, it was bound to have something related to the memorable Game Boy. Sakurai posted an image in the Miiverse showing off a Game Boy state. He also explained that if players turn on the 3D it’ll make it appear as though you’re actually looking at an actual Game Boy screen. It’s unknown if players will be restricted to combat within the gray colored Game Boy screen or if they’ll be able to move about outside its boarders.

Personally I feel that it be awesome if the stage changed from other Game Boy start up screens such as the Game Boy Color, Game Boy Advance and even the Nintendo DS. It also be cool if the ‘Power Indicator’ light actually lit up if your Nintendo 3DS was on the verge of dying.

For even more Smash news! Keep following the Mouse.. he’s watching you