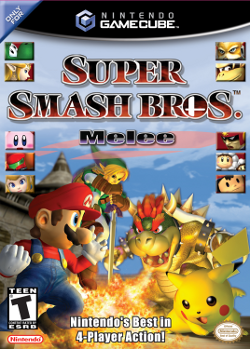 [Update: Tekken Tournament Tag 2 has been added to this years tournament]

Nintendo has announced that they will allow Super Smash Bros. Melee to be part of the 2014 Evolution World Championships, marking the second straight year the 13-year-old arena brawler has graced the tournament.

Outstanding news coming from the Nintendo front lines, as they are allowing the 13 year old classic, Super Smash Bros. Melee to take part in the 2014 Evolution World Championship. Unlike last year, Nintendo attempted to prevent Melee to be part of last years event, but fell to the overwhelming demand for it to be part of the Evolution experience because of the cries of the gaming community. The Super Smash Bros. Melee is part of this years world championship.

Deeply rooted in nostalgic memories, the cry for excellence will thrive in the minds of gamers challenge each other with nothing butt the very best the fighting genre has to offer. Games like Ultimate Marvel vs Capcom 3, Injustice Gods Among Us, Killer Instinct, Ultra Street Fighter IV, BlazBlue Chrono Phantasma, King of Fighters XIII and of course Super Smash Bros. Melee will be in the 2014 Evolution World Championship where participators and fans a like will be staying at the Las Vegas Hilton Hotel and Casino on July 11th-13th.

Thanks for the tip Stewart.

For everything gaming, keep it right here
Gaming After Hours